http://www.brooklynpaper.com/stories/30/7/30_07walmartprotest.html
By Christie Rizk
The Brooklyn Paper
Enlarge this image

The Brooklyn Paper / Tom Callan
Politicians, labor leaders and activists rallied in Albee Square last week to protest Wal-Mart, even though the new owner of the Gallery mall has said that the Arkansas-based giant will not rent in his new building.

It was supposed to be a rally to protest Wal-Mart’s possible first New York City store, but it became a victory party.

Union leaders came to Albee Square last week fearing that the recent sale of the Gallery mall would trigger a new attempt by Wal-Mart to find a location in Brooklyn. But those same leaders and workers ended up cheering as Pat Purcell, an organizer of Wal-Mart Free NYC, told the faithful, “There will be no Wal-Mart in Albee Square!”

The square will soon be bustling with development activity as new owners Acadia Realty Trust and partner Paul Travis begin demolishing the retail building to build an office and residential tower instead.

But Purcell confirmed that the developers — who paid $125 million for the site — had promised that the behemoth of Bentonville would not be a part of the plan.

Wal-Mart has said in the past that it had eyed the site, formerly owned by Thor Equities, which bought it for a mere $25 million in 2001. Some retail experts have said that a large, big-box store like Wal-Mart — if done properly — could fill a gap in the borough’s under-served retail market.

But that wasn’t on the agenda last week at the protest-turned-party. One by one, union leaders and elected officials allied with their cause stepped up to the mic to congratulate themselves and promise to keep fighting the retail giant.

“We are not done fighting against Wal-Mart in the city of New York,” said Bruce Both, the president of Union Local 1500. “We will oppose them at every turn.”

But celebration wasn’t the only item on the agenda. Most speakers complained that the new tower does not, as yet, include any below-market-rate rentals or co-ops. And the recent development boom in Downtown Brooklyn — thanks to a 2004 upzoning passed by the city council — has left a lot of small business owners around the Fulton Mall scrambling to save their businesses.

“Our city was built on the blood and sweat of our people,” said Joy Chatel, a member of Families United for Racial and Economic Equality. “We can’t allow outsiders to come in and take that away from us.”

As the world’s biggest retailer, Wal-Mart Stores Inc. pays billions of dollars a year in rent for its stores. Luckily for Wal-Mart, in about 25 states it has been paying most of that rent to itself — and then deducting that amount from its state taxes.

The strategy is complex, but the bottom line is simple: It has saved Wal-Mart from paying several hundred million dollars in taxes, according to court records and a person familiar with the matter. And Wal-Mart is far from alone.

The entire report by Jesse Drucker is available here we urge everyone to read this.

Below is the press release we recieved from Local 1500 and UNITE HERE outlining Governor Spitzers reaction to the Loophole and how he plans on eliminating it….

New York, NY – Unions and advocates praised Governor Spitzer today for standing up to Wal-Mart and other companies that exploit a little-known tax loophole that lets them pay rent to themselves and then deduct that rent from their taxes. Governor Spitzer proposed closing that loophole in his Executive Budget released on Wednesday, saving the state $83 million per year.

“It’s ridiculous that a company can get away with paying rent to itself and deducting that rent from its taxes,” said Bruce Raynor, General President of UNITE HERE. “But if companies are going to find a way to avoid paying every penny they ought to pay, you can be sure that Wal-Mart will be one of them.”

According to a front-page Wall Street Journal article on Thursday, Wal-Mart has avoided
paying several hundred million dollars in taxes by using a complex scheme. The loophole was plugged by the Federal government many years ago, but many states have not followed suit. New York was one of those states, until now. Governor Eliot Spitzer’s Executive Budget would close the loophole, saving the state $83 million a year. “Hard-working New Yorkers pay their fair share of taxes,” said Paul Blank of Wake Up Wal-Mart. “It’s time that companies like Wal-Mart do the same.”

According to Thursday’s Wall Street Journal article, tax-saving schemes like these have led to an increased percentage of state taxes being paid by individuals. As companies find new ways to lower the amount of taxes they pay, states increasingly rely on individuals and working families to make up the difference. “We’re glad that Governor Spitzer has decided to stand up to businesses that manipulate the tax system to shirk their responsibility to pay what they ought to pay in taxes,” said
Bruce Both, President of United Food and Commercial Workers Local 1500. “We hope the Legislature will join him in standing up for individuals and small businesses, who can’t take advantage of these ridiculous gimmicks.” 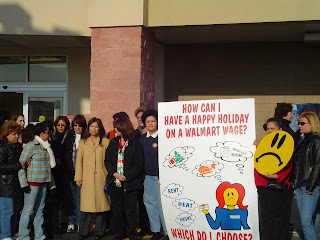 The suit claims that as many as 1.5 million current and former female employees earned less than men and were bypassed for promotions. The lawsuit exposes the Bentonville, Ark.-based retailing powerhouse to the possibility of billions of dollars in damages. Wal-Mart claimed that the conventional rules of class actions should not apply in the case because its 3,400 stores, including Sam’s Club warehouse outlets, operate like independent businesses, and that the company did not have a policy of discriminating against women.

But the court, in a 2-1 decision, disagreed. “Plaintiff’s expert opinions, factual evidence, statistical evidence and anecdotal evidence present significant proof of a corporate policy of discrimination and support plaintiff’s contention that female employees nationwide were subjected to a common pattern and practice of discrimination,” the court wrote. U.S. District Judge Martin Jenkins, the San Francisco trial court judge who said the case could proceed, had ruled that lawyers for the women had enough anecdotal evidence to warrant a class-action trial.

Wal-Mart took the case to the San Francisco-based appeals court. Jenkins said if companywide gender discrimination is proven at trial, Wal-Mart could be forced to pay billions of dollars to women who earned less than their male counterparts, with no opportunity to dispute their individual circumstances. Jenkins said it was “impractical on its face” to have individual hearings for each plaintiff and had planned to use a statistical formula to compensate the women. Wal-Mart, in seeking dismissal of the case, called that an unprecedented denial of its rights. Wal-Mart said women who allege they were discriminated against can file lawsuits against individual stores. The women’s lawyers said the idea was ridiculous, and would clog the federal judiciary. “Although size of this class action is large, mere size does not render a case unmanageable,” Judge Harry Pregerson wrote for the majority, which upheld Jenkins’ decision in its entirety.

Brad Seligman, one of the attorneys who represented the women suing Wal-Mart, said he suspected Wal-Mart would ask the appeals court to rehear the case with a panel of 15 judges. But he said the decision would hurt the company’s reputation. “No amount of PR by Wal-Mart is going to allow it to deal with its legacy of discrimination,” Seligman said. Wal-Mart spokeswoman Mona Williams said the company was not immediately prepared to comment.

Great job to everyone who came out yesterday for the event. The community really appreciates everyones hard work and efforts to bring good jobs and good developments to Brooklyn. Here are a few pictures from yesterdays event. Now we have a new fight, to insure responsible economic development at the Gallery. 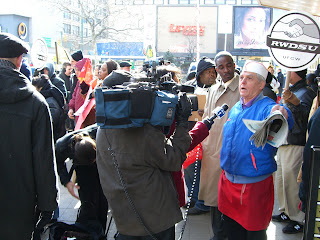 Albee Square tenant speaking to NY1 on why tearing down the Gallery is not right for Brooklyn. 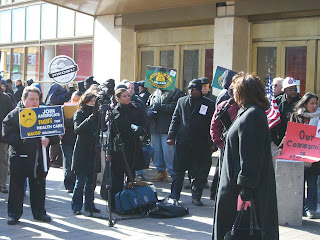 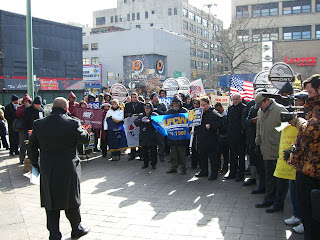 WMFNYC coordinator Ed Lynch speaking to the community on the effects of Wal-Mart.

We receieved great news late last night that the Developer for the Albee Square project will not allow a Wal-Mart in the Gallery. Here is the Press Release we received from Local 1500…

On Thursday, February 8th at 1:00 P.M. United Food and Commercial Workers Union Local 1500 will join with community organizations, members of the New York City Council, the Working Families Party, State Senator Eric Adams, Faith Based Leaders, Brooklyn Borough President Marty Markowitz and other Unions to announce an historic agreement with the developers of the proposed Albee Square Mall that will exclude Wal-mart from the project.

Representatives of the coalition and Albee Development LLC reached an agreement late Wednesday evening. “On the issue of Wal-mart, the developer and their representatives acted in a professional and responsible manner hearing our concerns about the devastating effect a Wal-mart would have in Brooklyn,” stated UFCW Local 1500 President Bruce W. Both. “They have made it clear to us that there are no plans now, nor will their be in the future, to bring Wal-mart to the Albee Square Development,” concluded Both.

Despite the agreement, the protest against Wal-mart, not the development, will take place. Protesters scheduled to participate in addition to the U.F.C.W. are the Change To Win Union, Jobs With Justice, F.U.R.E.E (Families United for Racial and Economic Equality) the Working Families Party, the New York Central Labor Council, A.C.O.R.N., New York City Council Members Leticia James, Erik Dilan and David Yassky, State Senator Eric Adams, the Teachers Union, the Laborers Union and the RWDSU.

While unable to attend the rally due to a previous commitment, Brooklyn Borough President Marty Markowitz has been supportive throughout the process and instrumental in reaching an agreement.

While expressing praise for the agreement, Director of Special Projects for UFCW Local 1500 Patrick Purcell Jr. said there is still work to be done before Albee Square’s final plans are reached. “The developers representatives, keeping with their cooperative approach, have agreed to continue to meet with the coalition to discuss other issues such as affordable housing,” Purcell stated “All parties understand the win-win situation that come from accountable and responsible development and open communication between developers and the communities. The people in the community want and deserve a voice. We look forward to a continued open and positive dialogue,” Purcell concluded.

We thought we’d save the time for local business owners printing their going out of business signs. If Wal-Mart comes the Fulton Mall the local retailers cannot survive.