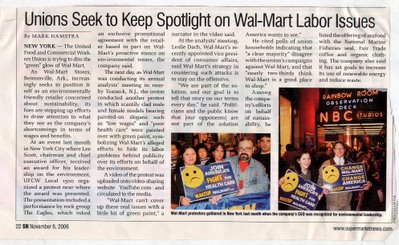 (Taken From Supermarket News November 6, 2006)
The United Food and Commerical Workers Union is trying to dim the “green” glow of Wal-Mart.
As Wal-Mart Stores, Bentonville, Ark., increasingly seeks to position itself as an environmentally friendly retailer concerned about sustainability its foes are stepping up efforts to draw attention to what they see as the company’s shortcomings in terms of wages and benefits.
At an event last month in New York City where Lee Scott, chairman and chief executive officer, received an award for his leadership on the environment, UFCW Local 1500 organized a protest near where the award was presented. The presentation included a performance by rock group The Eagles, which inked an exlusive promotional agreement with the retailer based in part on Wal-Mart’s proactive stance on environmental issues, the company said.
The next day, as Wal-Mart was conducting its annual analysts’ meeting in near by Teaneck, N.J., the union conducted another protest in which scantily clad male and female models bearing painted-on slogans such as low wages and poor health care were painted over with green paint, symbolizing Wal-Mart’s alleged efforts to hide its labor problems behind publicity over its efforts on behalf of the environment.
A video of the protest was uploaded onto video-sharing website www.YOUTUBE.com and circulated to the media. The video is available for viewing Here.
Wal-Mart can’t cover up these real issues with a little bit of green paint, a narrator in the video said.
At the analysts’ meeting Leslie Dach, Wal-Mart’s recently appointed vice president of consumer affiars said Wal-Mart’s strategy in counter such attacts is to stay on the offensive.
We are part of the solution, and our goal is to tell that story on our terms every day, he said. Politicians and the public know that [our opponents] are not part of the solution America wants to see. He cited polls of union households indicating that a clear majority disagree with the union’s campaigns against Wal-Mart, and that ‘nearly two-thirds think Wal-Mart is a good place to shop.
Among the company’s efforts on behalf of sustainability, he listed the offering of seafood with the National Marine Fisheries seal, Fair Trade coffee and organic clothing. The company also said it has set goals to increase its use of renewable energy and reduce waste.