Updates / Wal-Marting Across America – The Flog 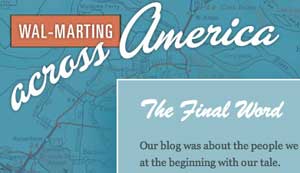 Honestly, after reading countless articles and reports on the great people who run Wal-Mart and their PR department you learn to laugh at some of the ridiculous stunts they try and pull over the eyes of American people. Regardless of where we stand on Wal-Mart, their ethics and Public Relations are a joke. Whether it be hiring fake liberal politicians, creating fake organizations or establishing front groups now what is simply the icing on the cake, Fake couples and their Fake traveling stories.

It has finally been revealed that the humorus flog (fake blog), www.WalMartingAcrossAmerica.com is a flat out PR stunt.
MediaPost.com has revealed the truth about the two travelers “Jim” and “Laura”. For those of you who aren’t familiar with Jim and Laura, here is a quick summary on what their blog was about…

Jim and Laura are like every American couple, hard workers just simply in search of a fabulous vacation from their full-time jobs. One day Jim and Laura had a brainstorm,

Great idea, couldn’t have said it better myself, this is where we encounter our first problem(s), they don’t exist (yet at least). Through non-stop heavy criticism from bloggers proclaiming that Jim and Laura did not exist, they now do…Wal-Mart Watch: Identity revealed.

“Laura” is now Laura St. Claire, a freelance writer. Jim is James Thresher, a professional photographer and Washington Post employee. Freelancing although, is against his contract with the Post, which has ordered him to return Wal-Mart’s money and remove his photos from the flog.

“Wal-Mart has hired fake people,” says Jonathan Rees, a labor historian and associate professor at Colorado State University at Pueblo, who has also worked as a staff researcher at the AFL-CIO. In a blog posting for the Web site The Writing On the Wal, Reese published an open letter to Laura and Jim challenging them to reveal themselves and asking who paid for their RV and gas.

When the blog was first released, many bloggers immediately knew how unrealistic the blog was. There has been plenty, not surprisingly… there’s more here, here, and elsewhere.

Blogging is an independent way for regular people to voice their opinions and feelings. We’re fine with Wal-Mart running a blog, what we shouldn’t be fine with is the integrity of their blogs. Wal-Mart trying to create this ‘hip’ image that it is so far from, this is yet another example of Wal-Mart’s attempt to fool their consumers. Another reason why this company is extremely messed up.

“Edelman wanted to make consumers think that Wal-Mart is a hip place that you’d want to use as the anchor point for a roadtrip. The problem is it’s not. And because blogging is not a control-based medium, Edelman couldn’t make Wal-Mart appear to be something it’s not. It rang false, and they got caught.”
—Publishing 2.0