If you haven’t read any of the news of Senator Lieberman and his opponent Ned Lamont speaking at the Wake Up Event in Connecticut, senate records read that Lamont actually owns Wal-Mart stock, which is very strange considering his comments on Wal-Mart “This is about waking up Wal-Mart, and this is also about waking up corporate America,” This can be percieved in two ways, we give Lamont benefit of the doubt and say he does believe this movement is about changing Wal-Mart to Change America. He see’s Wal-Mart’s wrong doings and wants to work towards changing them. Or we can look at Lamont as a $31,000 Wal-Mart stock holder. Lamont did not mention his shareholder status with the company at the rally, but did criticize Lieberman for not doing anything during his terms in the Senate to help the workers at Wal-Mart.
You cannot help but grow weary of what this Bus Tour can become, an event for politicians to stand on their soap box preaching political promises in order to get a few more votes. This fight and struggle against Wal-Mart is about workers, it’s about the workers who are mistreated time after time after time by the worlds largest company. It’s about the worlds largest employer not providing health insurance to it’s workers. These events cannot be a personalized soap box for politicians to showcase thier views. When Lieberman was asked if he was ready 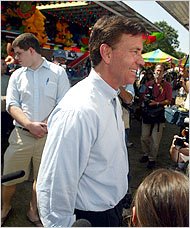 to take PAC money from Wal-Mart he quickly responded “Wal-Mart PAC sent my campaign a check in March, and we returned it a week later. Deal with the facts.” (Last month WMFNYC campaigned for Congressman Vito Fossella to return Wal-Mart’s $5,000 PAC, he never issued a response) Lieberman stepped up and showed his true colors by returning the money, you must question Lamont though for showing up and speaking at an Anti-Wal-Mart Rally while owning over $30,000 in Wal-Mart stock.